TWO million pounds has been saved from being thrown away thanks to the recycling efforts of Hounslow’s residents.

The money, which would have had to be spent paying landfill tax, will instead be able to pay for vital services in the borough.

The figure has just been revealed by Hounslow Council which was keen to salute everyone who played their part in helping both the local environment and local economy.

Read the rest of the article on the Hounslow Chronicle and see the delightful photo of our Patti, along with Councillor Colin Ellar and Nicola all dressed up!

Blowing out the candles 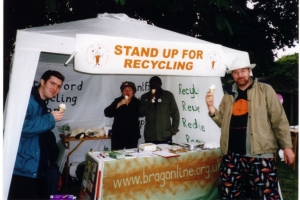 BRAG had a stall at the Isleworth Fair which was clearly so hot that ice creams needed to be bought.

END_OF_DOCUMENT_TOKEN_TO_BE_REPLACED 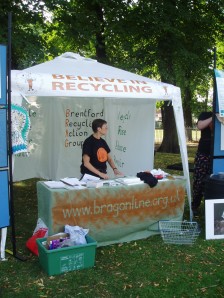 It was a lovely sunny day wtih people meandering about the park, getting their faces painted, eating, drinking and talking to neighbours.

END_OF_DOCUMENT_TOKEN_TO_BE_REPLACED

BRAG (Brentford Recycling Action Group) is a non-political community waste action group. We want to raise awareness of how you can reduce, reuse and recycle your waste.

Please come to our monthly meetings on the first Tuesday of each month at 7pm. The venue is the Meeting Room next to the Residents Club Room, Brentford Dock, TW8 8QT.

Meetings are followed by Green Drinks in the Magpie & Crown (CAMRA pub) from 8pm.